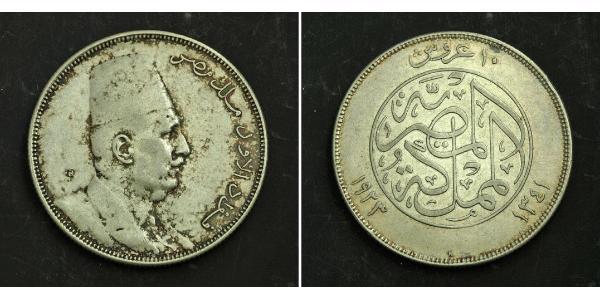 Obverse: Bust of King Fuad I of Egypt right.

Fuad I (26 March 1868 Ã¢â‚¬â€œ 28 April 1936), was the Sultan and later King of Egypt and Sudan, Sovereign of Nubia, Kordofan, and Darfur. The ninth ruler of Egypt and Sudan from the Muhammad Ali Dynasty, he became Sultan of Egypt and Sudan in 1917, succeeding his elder brother Sultan Husayn Kamil. He substituted the title of King for Sultan when the United Kingdom formally recognized Egyptian independence in 1922.

Fuad was born in Giza Palace in Cairo, the seventh son of Isma'il Pasha. His mother was Farial Kadin. As a great-grandson of Muhammad Ali Pasha, Fuad was of Albanian descent. He married his first wife in Cairo, 30 May 1895 at the Abbasiya Palace in Cairo, 14 February 1896, H.H. Princess Shivakiar Khanum Effendi (1876-1947). She was his cousin and the only daughter of Field Marshal H.H. Prince Ibrahim Fahmi Ahmad Pasha. They had two children, a son, Ismail Fuad, who died in infancy, and a daughter, Fawkia. Unhappily married, the couple divorced in 1898. During a dispute with the brother of his first wife, Fuad was shot in the throat. He survived, but carried that scar the rest of his life.

Fuad married his second wife at the Bustan Palace, Cairo, 26 May 1919. She was Nazli Sabri (1894-1978), daughter of H.E. Abdu'r-Rahim Pasha Sabri, sometime Minister of Agriculture and Governor of Cairo, by his wife, Tawfika Khanum Sharif. Queen Nazli also was a maternal granddaughter of Major-General H.E. Muhammad Sharif Pasha, sometime Prime Minister and Minister for Foreign Affairs, and a great-granddaughter of Suleiman Pasha, a French officer in Napoleon's army who converted to Islam and reorganized the Egyptian army. The couple had five children, the future Farouk I and four daughters, the Princesses Fawzia (who became Queen Consort of Iran), Faiza, Faika, and Fathiya. As with his first wife, Fuad's relation with his second wife was also stormy. The couple continually fought; Fuad even forbidding Nazli from leaving the palace. When Fuad died, it was said that the triumphant Nazli sold all of his clothes to a local used-clothes market in revenge. Fuad died at the Qubba Palace in Cairo and was buried at the Khedival Mausoleum in the ar-Rifai Mosque in Cairo. 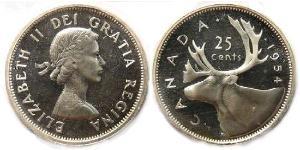 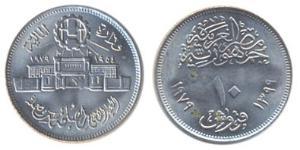 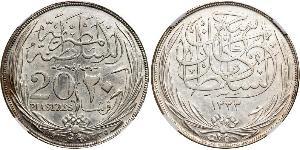