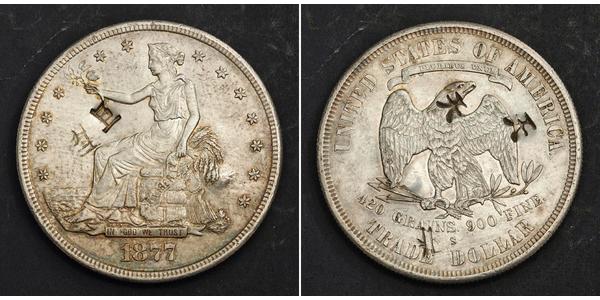 Obverse: Togate liberty, seated on a throne of trade goods and a bundle fo corn, holding inscribed band and olive branch. 13 stars around. Legend: IN GOD WE TRUST (at base of throne) 1877 **** ** ******* Reverse: American eagle below band with motto, holding three arrows and olive-brach. Weight and silve content below. LEgend: UNITED STATES OF AMERICA - 420 GRAINS 900 FINE - TRADE DOLLAR Comment: Mint initial (S) in field below eagle.

The Trade Dollar was a silver dollar coin issued by the United States solely for trade in the Orient with China, Korea, and Japan. It is 420 grains in weight, composed of 90% silver and 10% copper, as opposed to the 412 grains of a standard US silver dollar of the time period.

The Trade Dollar was produced in response to other Western powers, such as Great Britain, Spain, France, and particularly Mexico, circulating large, crown size silver coins in Asia. Trade Dollars had a slightly higher silver content than the regular circulation Seated Liberty Dollars and Morgan Dollars, to compete with these foreign trade coins. Most Trade Dollars ended up in Asia during their first two years of production, where they were very successful. Many of them exhibit chopmarks which are counterstamps from Asian merchants to verify the authenticity of the coins. Many trade coins of the Western powers and large silver coins from China, Korea, and Japan also bear these chopmarks. While most chopmarked coins are generally worth less than those without, some of the more fascinating chopmarks can actually give the coin a modest premium.

Trade Dollars were created by a legal act, the Coinage Act of 1873, where silver was de-monetized in the United States (although full de-monetization did not occur until 1900.) Thus, Trade Dollars did not circulate in the United States initially, but were legal tender for up to $5. Things changed, however, in 1876, when the price of silver spiraled downward as Western producers dumped silver on the market, making the Trade Dollar worth more at face value than its silver content. That resulted in Trade Dollars pouring back into the United States, as they were bought for as little as the equivalent of 80 US cents in Asia, and were then spent at $1 in the United States. This prompted Congress to revoke their legal tender status, and restrict their coinage to exportation demand only. However, this didn't stop unscrupulous persons from buying Trade Dollars at bullion value, and using them for payment as $1 to unsuspecting workers and merchants.

Production of the Trade Dollar was officially halted for business strikes in 1878, and thereafter from 1879-1885, produced only as proof examples of the coin. The issues of 1884 and 1885 were produced surreptitiously, and were unknown to the collecting public until 1908.

In February 1887, all non-mutilated outstanding Trade Dollars were made redeemable to the United States Treasury, and approximately 8 million of them were turned in.

English
Coin variations: 103 instance(s)
Prices: 94 instance(s)
You may be interested in following coins 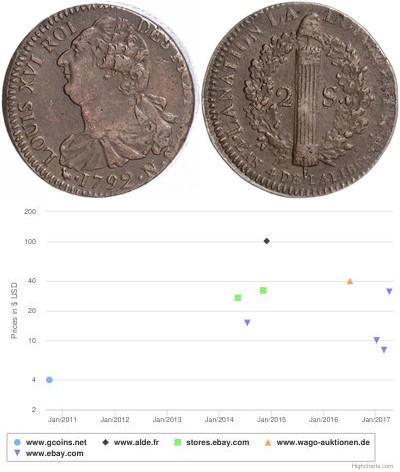