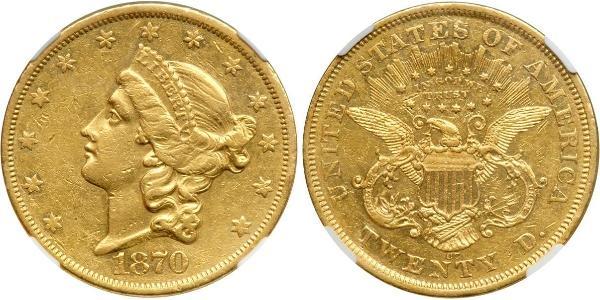 Full resolution: (1205 X 600pixels, file size: ~162K)
Description: 1870-CC $20 Liberty. NGC graded AU-53. Nice luster still visible. Key date "CC" mint $20 Gold coin. Low mintage of 3,789 pieces struck with only a small handful known. A leading roadblock to acquiring a complete set of double eagles is this famous 1870-CC Double Eagle. Among the most important dates in the series, indeed of any type or denomination, whenever we are able to present one in recent sales it has drawn a great deal of attention. And as a lovely AU53 example of this very rare issue, this piece is sure to have no difficulty finding its way into a world-class cabinet. Few 1870-CC Twenties exist from the original mintage. Fewer still retain even a hint of the original mint luster. Sad to say, many examples have been cleaned at one time or another, or have been mishandled, leaving behind scattered hairlines, digs and scuffs, or edge damage. The present does display some light marks, but we see more of the original surface than on most survivors. There is a small mark by the word TRUST on the reverse to aid in identifying this particular specimen. Also, a tiny reed mark lies atop the jaw line. Stars are relatively well detailed for this typically soft issue. Similar sharp delineation is evident in the hair waves, the coronet (with its border of pearls), and throughout the well-defined eagle. Medium honey-gold color spreads across the field and devices on both sides and rounds out the impressive record of fine attributes. Pop 1; 1 finer in 55 (PCGS # 8958) . Historian Rusty Goe describes in his book "The Mint at Carson Street" the origin of the 1870-CC and other gold coins struck that year, when he writes: "To get things off to a much anticipated start, Comstock miners deposited approximately $125,000 worth of gold ore at the new local mint in the first half of 1870. In February, $16,440 worth of the gold bullion was minted into $10 eagles, followed by $2,000 worth of $5 half eagles, and in March, $26,640 in new 1870-CC double eagles." Goe goes on to observe: "This date's low mintage automatically qualifies it as very scarce, and the small estimated survival rate of 1 to 1.3% accentuates the fact. At one time, the survival rare was estimated to be half of what it is today, and surprisingly, when it was thought that there were fewer examples extant, the value of 1870-CC double eagles relative to the prevailing coin market was lower than it is today…Most known examples are fairly banged up and lackluster in appearance, and several pieces have severe rim dings. Many XF to A U specimens have lost their originality due to cleanings, and many lower grade circulated pieces are rather scruffy looking." One other reason why high grade 1870-CC double eagles are so rare is that around the Comstock region, mine workers wages were paid in gold coins; banks held gold coins in reserve and depositors of gold ore at the mint had the option of receiving gold coins in exchange. At that time in the West, paper money was not acceptable in business transactions, people feared the effects of paper inflation, so gold coins had to work double-duty; they became heavily abraded in circulation. Estimated Value $375,000 - 450,000. Categories:
type to read more
Price

English
Coin variations: 47 instance(s)
Prices: 38 instance(s)
You may be interested in following coins 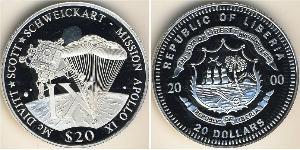