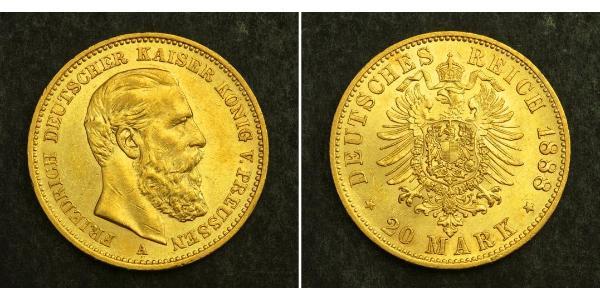 Frederick III (German: Friedrich III., Deutscher Kaiser und König von Preußen; 18 October 1831 - 15 June 1888) was German Emperor and King of Prussia for 99 days in 1888 during the Year of the Three Emperors. Frederick William Nicholas Charles (German: Friedrich Wilhelm Nikolaus Karl), known informally as Fritz, was the only son of Emperor William I, and was raised in his family's tradition of military service. Although celebrated as a young man for his leadership and successes during the Second Schleswig, Austro-Prussian and Franco-Prussian wars, he nevertheless professed a hatred of warfare, and was praised by friends and enemies alike for his humane conduct. Following the unification of Germany in 1871 his father, then King of Prussia, became the German Emperor, and on William's death at the age of 90 on 9 March 1888, the throne passed to Frederick, having by then been the Crown Prince for twenty-seven years. Frederick was suffering from cancer of the larynx and died on 15 June 1888, aged 57, following unsuccessful medical treatments for his condition.

English
Coin variations: 56 instance(s)
Prices: 53 instance(s)
You may be interested in following coins 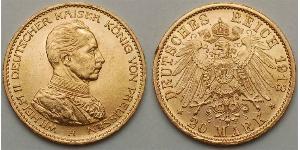