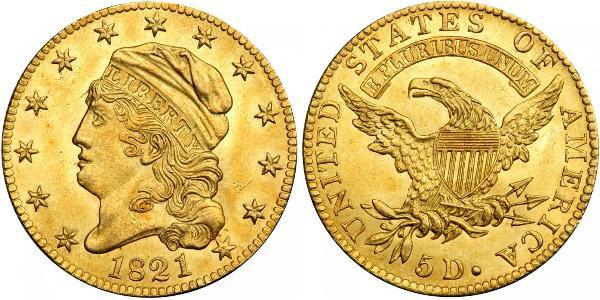 Full resolution: (1605 X 800pixels, file size: ~277K)
Description: 1821 BD-1 Rarity 6+. PCGS graded MS-63+. CAC Approved. A magnificent example, boldly struck on a problem free planchet and ablaze with intense mint luster. The shimmering surfaces are further enhanced by natural golden-olive overtones. This issue begins the trend of very rare Half Eagles, which continues throughout the decade. Interestingly, several die varieties exist for extremely low populations, suggesting that the recorded mintages are realistic, despite very low survival rates. Dannreuther & Bass describe two different varieties, this first having a close 13th star that is low and nearly touches Libertys curl, with widely spaced even date, and a second obverse in which star 13 is high and away from the curl, with 82 of date close, and both 1s away from the bust and hair. Very sharply struck with variegated warm golden color highlighting the surface. Throughout both sides the surface is quite clean with very few of the expected small marks noted. Such a pleasing specimen deserves to be flushed with pride at the good fortune to be from a source with such an illustrious provenance as the Amon Carter collection. When the golden heat of bidding is over and done with, the next owner may very well have his name appended to the provenance structure. This is one of the rarest dates in the entire Half Eagle series, although the mintage figure might indicate otherwise. PCGS has graded only one higher of this variety, a single MS-66! The 1821 Half Eagle is, for some reason, among the more overlooked rarities from this period, eclipsed by the 1819 and 1825/4 issues. Dannreuther estimates there to be 12 to 15 around. A typical specimen grading just Extremely Fine is all that one usually sees offered for sale. The specimen offered here clearly rates high and is one of the choicer seen or offered for sale in many years. The chief reason for the rarity of Half Eagles of this style lies not with any mintage figure, but, rather, with what happened to the coins after the left the mint and encountered the relationship of gold and silver prices in world markets. At the time, freshly minted gold coins, if melted, were worth more as bullion than face value. It is an interesting and perhaps numismatically oddity that after the War of 1812 ended (December 24, 1814; 1814 was the date of the peace treaty, but it effectively ended early in 1815), the Philadelphia Mint itself was paying a premium to buy its earlier-dated $5 gold coins! Somewhat similar to the situation that would occur years later with trade dollars, gold coins were produced only upon request from bullion depositors. Later issues never circulated at par. Many if not most were simply used as "trade" coins, later melted, or shipped overseas in payment for imports. To rectify this untenable situation and to permit gold coins to circulate at par in America, Congress lowered the authorized weight of gold coins through the Act of June 28, 1834, but not before virtually the entire production of Half Eagles of the early years passed into the hands of speculators and bullion dealers. Although mintages were fairly generous for many dates from 1813 through 1829, nearly all of the issues in this span are great rarities today, this being especially true of the dates in the 1820s. The type set buyer will have better luck and use of his money if an issue such as 1813, 1814/3, 1818, or 1820 is selected, none of which will be inexpensive, but other issues like the extremely rare 1821 presented here, are apt to be much more costly. The Half Eagle of the 1813-1829 design type is one of the highlights of a type set of early American gold coins. Pop 1; 1 finer in 66 (PCGS # 8129) . Estimated Value $125,000-UP. Ex: The Amon G. Carter Jr. Collection Jan. 18-21, 1984 Lot 659 The Del Valle Collection. Categories: $5 Capped Head
type to read more
Price 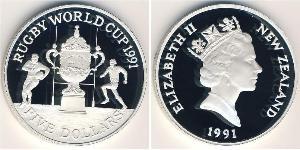