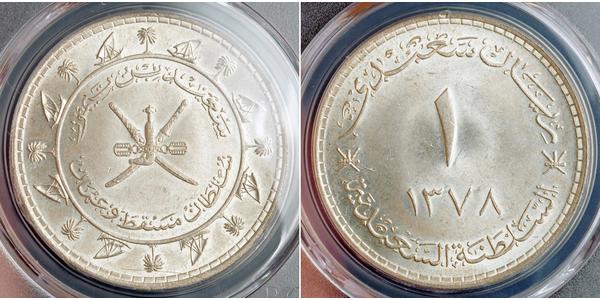 The son of Taimur bin Feisal, he inherited the remains of an Omani Empire, which included the neighboring provinces of Oman and Dhofar, as well as the last remnants of an overseas empire, including Gwadar on the Pakistani coast—the latter was ceded to Pakistan in 1958. Nevertheless, his petroleum-rich country also had long established ties with the United Kingdom, based on a 1798 Treaty of Friendship, and was a British protectorate since 1891.

As sultan, oil wealth would have allowed Sultan Said bin Taimur to modernize his country, and, in fact, he secured British recognition of its independence in 1951. Nevertheless, he also faced serious internal opposition, from the Imam – a religious leader of Oman, who claimed power in the sultanate for himself. The Imam's revolt in Jebel Akhdar was suppressed in 1955 with the help of the United Kingdom, but this, in turn, earned Taimur the animosity of Saudi Arabia, which supported the imam, and of Egypt, which regarded British involvement in suppressing the revolt as unconducive to the cause of Arab nationalism. In 1957, these two countries supported a renewed revolt by the Imam, which was similarly suppressed by 1959.

In 1958 Said sold Gwadar to Pakistan.

In 1965, the province of Dhofar revolted, this time with the support of People's Republic of China and some of the nationalist Arab states, followed by an assassination attempt in 1966, which had a marked effect on Said causing him to become even more erratic in governing the country. Reportedly, even wearing eyeglasses was discouraged. No one was safe from the sultan's paranoia, not even his own son, Qaboos, who was kept under virtual house arrest at the Sultan's palace in Salalah.

Qaboos staged a coup in 1970 and exiled his father to the United Kingdom. Said lived his last two years of life at the Dorchester Hotel in London. He was originally laid to rest in Brookwood Cemetery, Woking, Surrey, England. His corpse was then uprooted and transported back to Oman whereupon he was buried in the Royal cemetery in Muscat.

During his reign Said is rumored to have been suspicious towards banks and investments, and so keeping all his gold under his bed.

The Sultanate of Muscat and Oman (Arabic: سلطنة مسقط وعمان‎ Salṭanat Masqaṭ wa-‘Umān) was a thalassocratic nation that encompassed the present-day Sultanate of Oman and parts of present-day United Arab Emirates and Gwadar, Pakistan. The country is not to be confused with Trucial states, which were sheikhdoms under British protection since 1820.