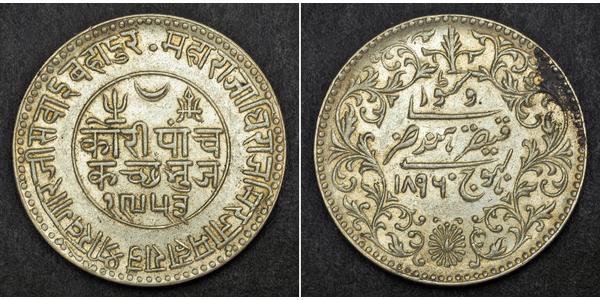 Obverse: Crescent flanked by trident and and trisul-knife above three lines of legends and VS date (1950).

Maharajadhiraj Mirza Maharao Sri Sir Khengarji III Sawai Bahadur, GCSI, GCIE, KIH (23 August 1866-15 January 1942) was a progressive and one of the longest ruling, Maharao of the Princely State of Cutch from 1875 to 1942.

He ascended the throne in 1875 after demise of his father Maharao Shri Pragmalji II of Kutch died on 19 December 1875. He ascended the throne on 3 January 1876 and reigned under a Council of Regency until he came of age, 11 August 1884 and was invested with full ruling powers, 14 November 1884.

At the pinnacle of the Jadeja clan of Rajputs, he advanced his state drastically over the sixty-six years of his reign, modernizing it and bringing it forth into the 20th century. During the latter part of Queen Victoria's reign, Sir Khengarji came to be appointed as an aide de camp to the Queen-Empress in her declining years, which excited some jealousy amongst the officials of the Government of India. He often traveled abroad to Europe, and was noted for his personal relations with the members of the ruling houses there. Khengarji III was one of the very few Indian monarchs to attend all three Delhi Durbars - in 1877,1903 and 1911. In 1919, he was granted a local salute of 19-guns, and represented India at a League of Nations conference in Geneva in 1921. Sir Khengarji died in 1942, aged 75, and was succeeded by his son Vijayaraji.