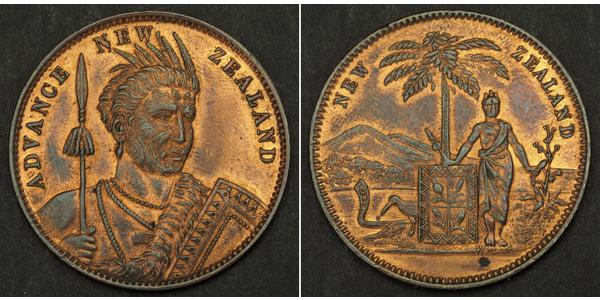 Reverse: Crowned maori figure (holding a spear and patu), standing beneath palm and leaning on square painting or coat-of-arms. River landscape with mountians, a boat, a bird and a plant in background. Legend: NEW ZEALAND

A patu is a generic term for a club or pounder used by the Maori, the indigenous people of New Zealand. The word patu in the Maori language means to strike, hit, beat, or subdue.

The city was named by the Canterbury Association, which settled the surrounding province of Canterbury. The name of Christchurch was agreed on at the first meeting of the association on 27 March 1848. It was suggested by John Robert Godley, who had attended Christ Church, Oxford. Some early writers called the town Christ Church, but it was recorded as Christchurch in the minutes of the management committee of the association. Christchurch became a city by Royal Charter on 31 July 1856, making it officially the oldest established city in New Zealand.

The river that flows through the centre of the city (its banks now largely forming an urban park) was named Avon at the request of the pioneering Deans brothers after the Scottish River Avon, which rises in the Ayrshire hills near what was their grandfather's farm and flows into the Clyde.

The usual Māori name for Christchurch is Ōtautahi ("the place of Tautahi"). This was originally the name of a specific   site by the Avon River near present-day Kilmore Street and the   Christchurch Central Fire Station. The site was a seasonal dwelling of Ngāi Tahu chief Te Potiki Tautahi, whose main home was Port Levy on Banks Peninsula. The Ōtautahi name was adopted in the 1930s. Prior   to that the Ngāi Tahu generally referred to the Christchurch area as   Karaitiana, a transliteration of the English word Christian. The city's name is often abbreviated by New Zealanders to Chch. In New Zealand Sign Language,   the city's name is the fingerspelled letter C (made by forming the hand   into a C shape) signed twice, with the second to the right of the   first, while mouthing "Christchurch".