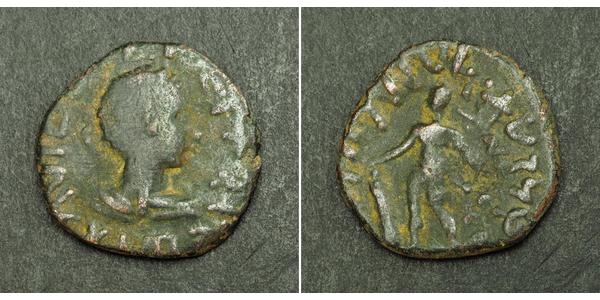 The Kushan Empire (Ancient Greek: Βασιλεία Κοσσανῶν; Bactrian: Κυϸανο, Kushano) was a syncretic empire, formed by the Yuezhi, in the Bactrian territories in the early 1st century. It spread to encompass much of Afghanistan,[16] and then the northern parts of the Indian subcontinent at least as far as Saketa and Sarnath near Varanasi (Benares), where inscriptions have been found dating to the era of the Kushan Emperor Kanishka the Great. Emperor Kanishka was a great patron of Buddhism. He played an important role in the establishment of Buddhism in the Indian subcontinent and its spread to Central Asia and China.

The Kushans were most probably one of five branches of the Yuezhi confederation, an Indo-European nomadic people of possible Tocharian origin, who migrated from Gansu and settled in ancient Bactria.

The Kushans possibly used the Greek language initially for administrative purposes, but soon began to use Bactrian language. Kanishka sent his armies north of the Karakoram mountains. A direct road from Gandhara to China remained under Kushan control for more than a century, encouraging travel across the Karakoram and facilitating the spread of Mahayana Buddhism to China.

The Kushan dynasty had diplomatic contacts with the Roman Empire, Sasanian Persia, the Aksumite Empire and the Han dynasty of China. The Kushan Empire was at the center of trade relations between the Roman Empire and China: according to Alain Daniélou, "for a time, the Kushana Empire was the centerpoint of the major civilizations". While much philosophy, art, and science was created within its borders, the only textual record of the empire's history today comes from inscriptions and accounts in other languages, particularly Chinese.

The Kushan empire fragmented into semi-independent kingdoms in the 3rd century AD, which fell to the Sasanians invading from the west, establishing the Kushano-Sasanian Kingdom in the areas of Sogdiana, Bactria and Gandhara. In the 4th century, the Guptas, an Indian dynasty also pressed from the east. The last of the Kushan and Kushano-Sasanian kingdoms were eventually overwhelmed by invaders from the north, known as the Kidarites, and then the Hephthalites.

Kujula Kadphises (Kushan language: Κοζουλου Καδφιζου, also Κοζολα Καδαφες; Kharoṣṭhī: Kujula Kasasa; Ancient Chinese: 丘就卻, Qiujiuque; reigned 30–80 CE, or 40-90 CE according to Bopearachchi[1]) was a Kushan prince who united the Yuezhi confederation during the 1st century CE, and became the first Kushan emperor. According to the Rabatak inscription, he was the great grandfather of the great Kushan king Kanishka I. He is considered the founder of the Kushan Empire.

The origins of Kujula Kadphises are quite obscure, and he is usually believed to be a descendant of the Kushan ruler Heraios, or possibly identical with him. However, Kujula shares his name (Kushan: Κοζουλου on some of his "Hermaeus" coins, or Κοζολα on his "Augustus" coins) with some of the last Indo-Scythian rulers, such as Liaka Kusulaka (Greek: Λιακα Κοζουλο), or his son Patika Kusulaka, which might suggest some family connection.

There are few contemporaneous accounts of Kujula Kadphises; since none of these texts are by Kushan authors, their accuracy and the motives of the authors may be questionable. For example, the rise of Kujula Kadphises is portrayed, in a later Chinese historical chronicle, Hou Hanshu, as the result of a bloody civil war.

[T]he prince [xihou] of Guishuang, named Qiujiuque [Kujula Kadphises], attacked and exterminated the four other princes [of the Yuezhi]. He established himself as king, and his dynasty was called that of the Guishuang [Kushan] King. He invaded Anxi [Indo-Parthia], and took the Gaofu [Kabul] region. He also defeated the whole of the kingdoms of Puda [Paktiya] and Jibin [Kapisha and Gandhara]. Qiujiuque was more than 80 years old when he died.

In the process of their expansion eastward, Kujula Kadphises and his son Vima Takto (or Vema Tahktu) seem to have displaced the Indo-Parthian kingdom, established in northwestern India by the Parthian Gondophares since around 20 CE:

His son, Yangaozhen [probably Vema Tahktu or, possibly, his brother Sadaṣkaṇa], became king in his place. He defeated Tianzhu [North-western India] and installed Generals to supervise and lead it. The Yuezhi then became extremely rich. All the kingdoms call [their king] the Guishuang [Kushan] king, but the Han call them by their original name, Da Yuezhi [Great Yuezhi].

The invasion of the Indo-Parthian kingdom led by Kujula Kadphises is thought to have occurred some time after 45 CE, during the reign of Gondophares's successors: Abdagases and Sases.