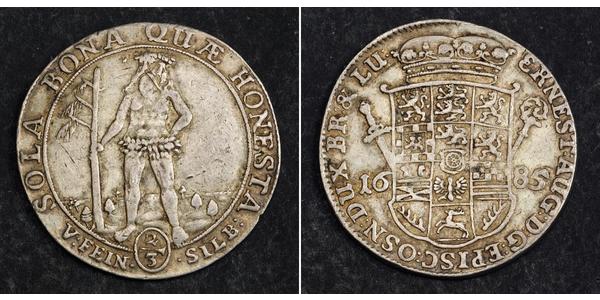 1685, Brunswick-Luneburg-Calenberg, Ernest Augustus. Silver 2/3 Thaler Coin. XF- Motto: Only those things are good which are honorable!

Obverse: Standing half-naked giant (a Woodwoose), holding a giant tree beneath him. Tiny trees in landscape below behind him. Legend: SOLA BONA QUAE HONESTA ("Only those things are good which are honorable!")  V: FEIN (2/3) SILB : ("of fine silver")

Ernest Augustus (German: Ernst August; Latin: Ernestus Augustus; 20 November 1629 – 23 January 1698) was duke of Brunswick-Lüneburg and ruled over the Principality of Calenberg (with its capital Hanover) subdivision of the duchy. He was appointed prince-elector, but died before the appointment became effective. He was also Administrator of the Prince-Bishopric of Osnabrück.

Ernest Augustus was born at Herzberg am Harz, the son of George, Duke of Brunswick-Lüneburg and Anne Eleonore of Hesse-Darmstadt (Ernest Augustus was descended from the Albertinian line of the Habsburg family and also the House of Hohenzollern). In 1658 he married Sophia of the Palatinate in Heidelberg.   As the fourth son, he had little chance of succeeding his father as   ruler, and so, in 1662, his relatives appointed him administrator of   Osnabrück; according to the Peace of Westphalia,   every second incumbent of the Osnabrück see was to be appointed by the   dukes of Brunswick-Lüneburg. However, after two of his elder brothers   had died without sons, Ernest Augustus inherited part of his father's   territories in 1679, namely Calenberg (including Göttingen).

In 1683, against the protestations of his five younger sons, Ernest Augustus instituted primogeniture,   so that his territory would not be further subdivided after his death,   and also as a pre-condition for obtaining the coveted electorship. He   participated in the Great Turkish War on the side of Leopold I, Holy Roman Emperor. In 1692 he was appointed prince-elector by the Emperor; however, the electorship did not come into effect until 1708. Ernest Augustus died in 1698 at Herrenhausen; he was succeeded as duke by his eldest son George I Louis, who would later also become king of Great Britain.