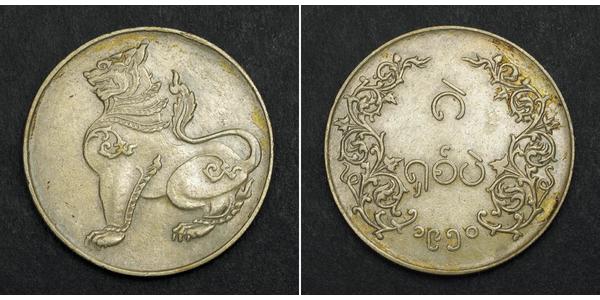 During the first years of post-independence Burma, insurgencies by the Red Flag Communists led by Thakin Soe, the White Flag Communists led by Thakin Than Tun, the Yèbaw Hpyu (White-band PVO) led by Bo La Yaung, a member of the Thirty Comrades, army rebels calling themselves the Revolutionary Burma Army (RBA) led by communist officers Bo Zeya, Bo Yan Aung and Bo Yè Htut – all three of them members of the Thirty Comrades, Arakanese, and the Karen National Union (KNU).

Remote areas of northern Burma were for many years controlled by an army of Kuomintang (KMT) forces after the Communist victory in China in 1949. Burma accepted foreign assistance in rebuilding the country in these early years, but continued American support for the Chinese Nationalist military presence in Burma finally resulted in the country rejecting most foreign aid, refusing to join the Southeast Asia Treaty Organisation (SEATO) and supporting the Bandung Conference of 1955. Burma generally strove to be impartial in world affairs and was one of the first countries in the world to recognise Israel and the People's Republic of China.

By 1958, the country was largely beginning to recover economically, but was beginning to fall apart politically due to a split in the Anti-Fascist People's Freedom League (AFPFL) into two factions, one led by Thakins Nu and Tin, the other by Ba Swe and Kyaw Nyein. And this despite the unexpected success of U Nu's 'Arms for Democracy' offer taken up by U Seinda in the Arakan, the Pa'O, some Mon and Shan groups, but more significantly by the PVO surrendering their arms. The situation became very unstable in parliament, with U Nu surviving a no-confidence vote only with the support of the opposition National United Front (NUF), believed to have 'cryptocommunists' amongst them.

Army hardliners now saw the 'threat' of the CPB coming to an agreement with U Nu through the NUF, and in the end U Nu 'invited' Army Chief of Staff General Ne Win to take over the country. Over 400 'communist sympathisers' were arrested, of which 153 were deported to the Coco Islands in the Andaman Sea. Among them was the NUF leader Aung Than, older brother of Aung San. The Botataung, Kyemon and Rangoon Daily were also closed down.

Ne Win's caretaker government successfully stabilised the situation and paved the way for new general elections in 1960 that returned U Nu's Union Party with a large majority. The situation did not remain stable for long, when the Shan Federal Movement, started by Nyaung Shwe Sawbwa Sao Shwe Thaik (the first President of independent Burma 1948-52) and aspiring to a 'loose' federation, was seen as a separatist movement insisting on the government honouring the right to secession in 10 years provided for by the 1947 Constitution.

Ne Win had already succeeded in stripping the Shan Sawbwas of their feudal powers in exchange for comfortable pensions for life in 1959. He staged the 1962 coup d'état on 2 March 1962, arrested U Nu, Sao Shwe Thaik and several others, and declared a 'socialist state' run by a 'Union Revolutionary Council' of senior military officers. Sao Shwe Thaik's son, Sao Mye Thaik, was shot dead in what was generally described as a 'bloodless' coup. Thibaw Sawbwa Sao Kya Seng also disappeared mysteriously after being stopped at a checkpoint near Taunggyi.