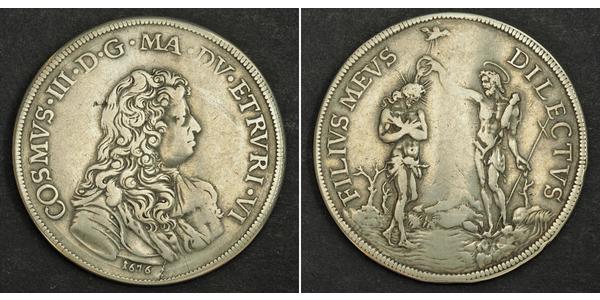 The Medici family, one of the leading families in Europe for over four hundred years, ends with Giovanni Gaston. He had no heirs and was unable to provide for his succession. Thus, in 1738, the Grand Duchy of Florence becomes attached to the House of Austria.

John the Baptist was an itinerant preacher and a major religious figure who led a movement of baptism at the Jordan River. Most historians agree he baptized Jesus. John was a historical figure mentioned in each of the Canonical gospels, Aramaic Matthew and by the Jewish historian Josephus.He followed the example of previous Hebrew prophets, living austerely, challenging sinful rulers, calling for repentance, and promising God's justice. John is regarded as a prophet in Christianity, Islam, the Bahá'í Faith, and Mandaeism.

Cosimo III de' Medici (14 August 1642 – 31 October 1723) was the penultimate Grand Duke of Tuscany. He reigned from 1670 to 1723, and was the elder son of Grand Duke Ferdinando II.   Cosimo's 53-year long reign, the longest in Tuscan history, was marked   by a series of ultra-reactionary laws which regulated prostitution and   banned May celebrations. His reign also witnessed Tuscany's   deterioration to previously unknown economic lows. He was succeeded by   his elder surviving son, Gian Gastone, when he died, in 1723.

He married Marguerite Louise d'Orléans, a cousin of Louis XIV. It was a marriage fraught with tribulation. Marguerite Louise eventually abandoned Tuscany for the Convent of Montmartre. Together, they had 3 children: Ferdinando in 1663, Anna Maria Luisa, Electress Palatine, in 1667, and Gian Gastone, the last Medicean ruler of Tuscany, in 1671.

In later life, he attempted to have Anna Maria Luisa recognised as the universal heiress of Tuscany, but Charles VI, Holy Roman Emperor,   would not allow it because Florence was nominally an imperial fief, and   he felt he alone could alter the Tuscan laws of succession. All   Cosimo's efforts to salvage the plan floundered, and in 1737, upon his   younger son's death, Tuscany passed to the House of Lorraine.