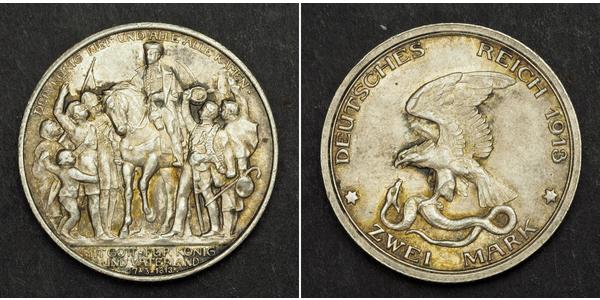 Obverse: Frederick William III of Prussia on horseback surrounded by soldiers and civilian people cheering around him. Legend: DER KÖNIG RIEF UND ALLE KAMEN . ("The King has called and everybody came..." - addressing the proclamation of 1813) Exergue: MIT GOTT . FUR KÖNIG UND VATERLAND 17.3.1813 ("With god for King and Homeland, 17th March 1813")

The proclamation An Mein Volk ("To my People") was issued by Frederick William III of Prussia on 17 March 1813 in Breslau (Wrocław). Addressed to his subjects, Preußen und Deutsche ("Prussians and Germans" — the former term embracing several nationalities), it appealed for their support in the struggle against Napoleon. Hostilities had been declared the day before. The document is the first instance of a Prussian monarch directly addressing the public in order to justify his policies. It was drafted by the Prussian councillor Theodor Gottlieb von Hippel the Younger, and published in the Schlesische privilegirte Zeitung on 20 March 1813. The proclamation, which affirmed the unity of crown, state and nation, led to the massive expansion of the Prussian army, and to the creation of militias, paramilitary organizations, and Freikorps (such as that led by Major Adolf von Lützow).