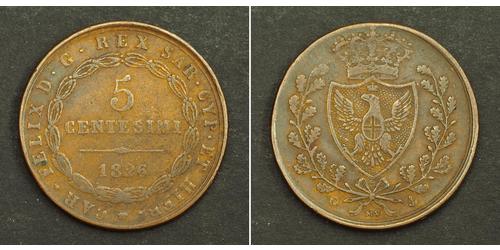 Reverse: Crown aboe shield of the Kindom of Sardinia. All within wreath. Engraver´s initials (M.V.) below, flanked by privy marks.

Kingdom of Sardinia, also known as Piedmont-Sardinia or Sardinia-Piedmont, was the name given to the possessions of the Houseof Savoy in 1720, when the island of Sardinia was awarded by the Treaty of London to Duke Victor Amadeus II of Savoy to compensate him for the loss of Sicily to Austria. Besides Sardinia, the kingdom included Savoy, Piedmont and Nice; Liguria, including Genoa, was added by the Congress of Vienna in 1815. Officially, the nation's name became Kingdom of Sardinia, Cyprus, and Jerusalem, Duchy of Savoy and Montferrat, Principality of Piedmont. During most of the 18th and 19th centuries under the House of Savoy, the political and economical capital was Turin. In 1860 Nice and Savoy were ceded to France as a price paid for French support in the campaign to unify Italy. In 1861, it became a founding state of the new Kingdom of Italy, and ceased to exist after that date.

He was the eleventh child and fifth son born to Victor Amadeus III of Sardinia and Maria Antonietta of Spain. His maternal grandparents were Philip V of Spain and Elizabeth of Parma.

He was married by proxy to Maria Cristina, Princess of Bourbon-Two Sicilies (January 17, 1779- March 11, 1849) on 7 March 1807. She was a daughter of Ferdinand I of the Two Sicilies and Marie Caroline of Austria.

Charles Felix died without issue after a reign of ten years. He was succeeded by the senior male of his House as Charles Albert of Sardinia.