Obverse: Diademed head of Demetrios I Soter right. All within wreath.

All offered coins are guaranteed to be ancient and as described.

Demetrius was sent to Rome as a hostage during the reign of his father Seleucus IV Philopator and his mother Laodice IV. When his father was murdered by his finance minister Heliodorus in 175 BC., his uncle Antiochus IV Epiphanes killed the usurper, but usurped the throne himself. When Antiochus IV died in 163 BC., his 9-year-old boy son Antiochus V Eupator was made king by Lysias. Demetrius was then 22 years old (thus he was born in 185 BC). He requested the Roman Senate to restore the Syrian throne to him, but was rejected, since the Romans believed that Syria should be ruled by a boy rather than a man. Two years later, Antiochus V was greatly weakened because Rome sent an emissary to sink his ships and hamstring his elephants for his violation of the Peace of Apamea, storing up too much weaponry. Demetrius escaped from confinement and was welcomed back on the Syrian throne in 161 BC. He immediately killed Antiochus V and Lysias.

Demetrius I is famous in Jewish history for his victory over the Maccabees, killing Judas Maccabaeus in Nisan, 160 BC. Demetrius acquired his surname of Soter, or Savior, from the Babylonians, whom he delivered from the tyranny of the Median satrap, Timarchus. Timarchus, who had distinguished himself by defending Media against the emergent Parthians, seems to have treated Demetrius' accession as an excuse to declare himself an independent king and extend his realm into Babylonia. His forces were however not enough for the legal Seleucid king: Demetrius defeated and killed Timarchus in 160 BC, and dethroned Ariarathes, king of Cappadocia. The Seleucid empire was temporarily united again. Demetrius may have married his sister Laodice V, by whom he had three sons Demetrius II Nicator, Antiochus VII Sidetes and Antigonus.

Demetrius' downfall may be attributed to Heracleides, a surviving brother of the defeated rebel Timarchus, who championed the cause of Alexander Balas, a boy who claimed to be a natural son of Antiochus IV Epiphanes. Heracleides convinced the Roman Senate to support the young pretender against Demetrius I.

The Jews also had a role in the down fall of Demetrius I. Alexander Balas came with a mercenary army, landed and occupied Ptolemais, and reigned as a rival king of the Seleucids in 152 BC. He appointed Jonathan Maccabaeus, the brother and successor of Judas Maccabaeus, as the high priest of Judea, in order to make the Jews his allies. Jonathan, who was born of a priestly family but not from Zadok, the high priestly stock, took the title in Tishri, 152 BC. When Demetrius heard of it, he wrote a letter granting more privileges to Jonathan (1 Macc. 10:25-45). The Jews did not believe in him, because of his past persecutions of the Jews. They joined with Balas, who defeated and killed Demetrius I in 150 BC.

In 1919 Constantine Cavafy published a poem about Demetrius's time as a hostage in Rome.

spa1 » Seleukid Empire (312 BC–63 BC) (16 монет)
Seleucid dynasty founded by Seleucus I Nicator following the division of the empire (Macedonia) created by Alexander the Great. Seleucus established himself in Babylon in 312 BC, the year used as the foundation date of the Seleucid Empire. T ...
Edit
Опис: 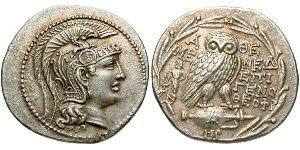