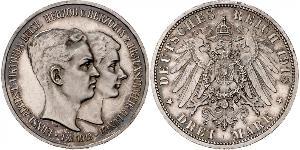 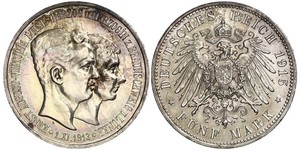 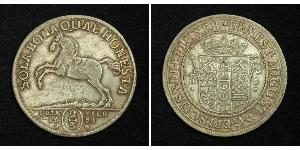 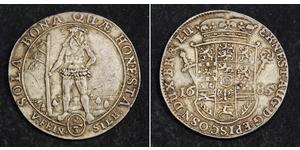 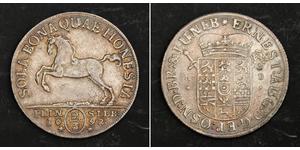 His father succeeded as pretender to the Hanoverian throne and as Duke of Cumberland and Teviotdale in the peerage of Great Britain in 1878. The younger Prince Ernest August became heir apparent to the dukedom of Cumberland and to the Hanoverian claim upon the deaths of his two elder brothers, George and Christian. He was a first cousin of George V of the United Kingdom, Nicholas II of Russia, and Christian X of Denmark, Haakon VII of Norway, and Constantine I of Greece.

In 1884, the reigning Duke of Brunswick-Wolfenbüttel, a distant cousin, died. Since the younger branch of the House of Ghuelph died with him, under house rules it would have passed to the Duke of Cumberland, who immediately claimed the throne. However, the Imperial Chancellor, Otto von Bismarck, managed to get the Federal Council (Bundesrat) of the German Empire to rule that the Duke of Cumberland would disturb the peace of the empire if he ascended the throne of Brunswick. Bismarck did this because the duke had never formally renounced his claims to the kingdom of Hanover, which had been annexed to Prussia in 1866 following the end of the Austro-Prussian War (Hanover had sided with losing Austria). Instead, Prince Albrecht of Prussia became the regent of Brunswick. After Prince Albrecht's death in 1906, the duke offered that he and his elder son, Prince George, would renounce their claims to the Duchy in order to allow Ernst, his only other surviving son, to take possession of the Duchy, but this option was rejected by the Bundesrat and the regency continued, this time under Duke Johann Albrecht of Mecklenburg-Schwerin, who had previously acted as regent for his nephew in Mecklenburg.

Marriage and accession to the duchy of Brunswick[edit]

When Ernest's older brother, Prince George, died in an automobile accident on 20 May 1912, the German Emperor sent a message of condolence to the Duke of Cumberland. In response to this friendly gesture, the Duke sent his only surviving son, Ernest, to Berlin to thank the Emperor for his message. Ernest and the German Emperor were third cousins in descent from George III of the United Kingdom. In Berlin, Ernest met and fell in love with the Emperor William II's only daughter, Princess Victoria Louise of Prussia.

On 24 May 1913, Ernest and Victoria Louise, third cousins once removed through descent from George III's sons King Ernest Augustus I of Hanover and Edward, Duke of Kent, were married to each other. This marriage ended the decades-long rift between the Houses of Hohenzollern and Hanover. The wedding of Prince Ernest Augustus and Princess Victoria Louise was also the last great gathering of European sovereigns before the outbreak of The Great War. In addition to the German Emperor and Empress and the Duke and Duchess of Cumberland, George V and Queen Mary of the United Kingdom and Tsar Nicholas II attended. Upon the announcement of his betrothal to Princess Victoria Louise in February 1913, Prince Ernest Augustus took an oath of loyalty to the German Emperor and accepted a commission as a cavalry captain and company commander in the Zieten–Hussars, a Prussian Army regiment in which his grandfather (George V) and great-grandfather (Ernst August I) had been colonels. Two imprisoned British spies Captain Stewart and Captain Trench, were pardoned and released by the Kaiser as a wedding present to the United Kingdom.[1] George V of the United Kingdom gave his consent to the marriage on 17 March 1913 as required under the Royal Marriages Act.[2]

On 27 October 1913, the Duke of Cumberland formally renounced his claims to the duchy of Brunswick in favor of his surviving son. The following day, the Federal Council voted to allow Prince Ernest Augustus of Cumberland to become the reigning Duke of Brunswick. The new Duke of Brunswick, who received a promotion to colonel in the Zieten–Hussars, formally took possession of his duchy on 1 November.

During World War I, the duke rose to the rank of major-general.

On 8 November 1918, he was forced to abdicate his throne along with the other German kings, grand dukes, dukes, and princes. The previous year, his father's British dukedom was suspended under the Titles Deprivation Act 1917 as a result of the Duke's service in the German army during the war, and Ernest Augustus' title as Prince of the United Kingdom was suspended under the same Act. Thus when his father died, in 1923, Ernest Augustus did not succeed to his father's title of Duke of Cumberland. For the next thirty years Ernest Augustus would remain as head of the House of Hanover, living in retirement on his various estates.

He lived to see one of his children come to a European throne – in 1947 his daughter Frederica became Queen of the Hellenes when her husband Prince Paul of Greece and Denmark succeeded his brother as King. The Duke of Brunswick is the maternal grandfather of Queen Sophia of Spain and the former King Constantine II of Greece.

He died at Marienburg Castle near Hanover in 1953.

The Duke and Duchess of Brunswick had five children:[3]

Under settled practice dating to 1714, as a male-line descendant of George III, Prince Ernst August III of Hanover also held the title of Prince of Great Britain and Ireland with the style of Highness.[4]