Charles William Frederick (May 12, 1712 in Ansbach – August 3, 1757 in Gunzenhausen), nicknamed der Wilde Markgraf (the Wild Margrave), was the margrave of the Principality of Ansbach from 1729 to his death.

Charles William Frederick was the son of William Frederick, Margrave of Brandenburg-Ansbach (1686–1723) and his wife Duchess Christiane Charlotte of Württemberg (1694–1729). During his youth, his mother ruled as regent.

When he came to power, Charles William Frederick ruled as a typical absolute monarch with a luxurious court life. He left his heir Charles Alexander a total debt of 2.3 million Reichsthaler, and he spent 10% of the state budget on hunting. He had 56 churches and many palaces built, among them a building in Triesdorf for his falcons, his greatest passion, on which he spent more than a half million guilders between 1730 and 1748. His love of hunting, particularly with his falcons, is what earned him his nickname, the Wild Margrave.

Charles William Frederick died of a stroke on August 2, 1757.

English
Coin variations: 7 instance(s)
Prices: 9 instance(s)
You may be interested in following coins 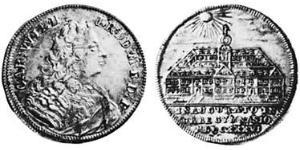 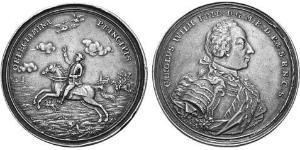 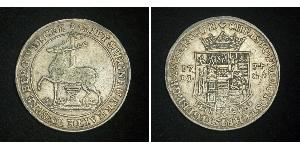 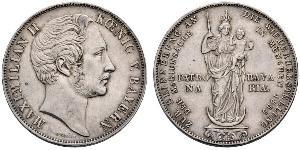