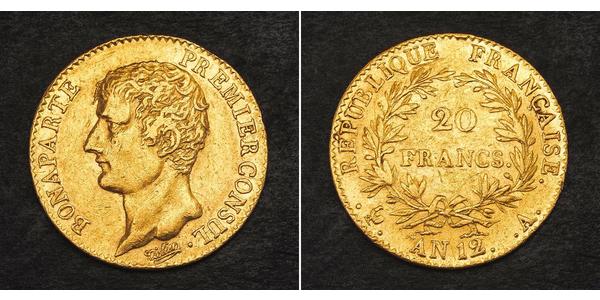 For your consideration a scarce gold coin struck during the last year of the consulate government of France, which was the predecessor of the Napoleonic Empire. A beautiful gold coin with great historic importance and a good investment opportunity!

The Consulate was the government of France between the fall of the Directory in the coup of 18 Brumaire in 1799 until the start of the Napoleonic Empire in 1804. By extension, the term The Consulate also refers to this period of French history. During this period, NapolÃ©on Bonaparte, as First Consul had established himself as the head of a more conservative, authoritarian, autocratic, and centralized republican government in France while not declaring himself head of state. Nevertheless, due to the long-lasting institutions established during these years, Robert B. Holtman has called the Consulate "one of the most important periods of all French history."

Napoleon Bonaparte (15 August 1769 - 5 May 1821) later known as Emperor Napoleon I, was a military and political leader of France whose actions shaped European politics in the early 19th century.

Born in Corsica and trained as an artillery officer in mainland France, Bonaparte rose to prominence under the First French Republic and led successful campaigns against the First and Second Coalitions arrayed against France. In 1799, he staged a coup d'Ã©tat and installed himself as First Consul; five years later he crowned himself Emperor of the French. In the first decade of the nineteenth century, he turned the armies of the French Empire against every major European power and dominated continental Europe through a series of military victories. He maintained France's sphere of influence by the formation of extensive alliances and the appointment of friends and family members to rule other European countries as French client states.

The French invasion of Russia in 1812 marked a turning point in Napoleon's fortunes. His Grande ArmÃ©e was badly damaged in the campaign and never fully recovered. In 1813, the Sixth Coalition defeated his forces at Leipzig; the following year the Coalition invaded France, forced Napoleon to abdicate and exiled him to the island of Elba. Less than a year later, he escaped Elba and returned to power, but was defeated at the Battle of Waterloo in June 1815. Napoleon spent the last six years of his life under British supervision on the island of Saint Helena. An autopsy concluded he died of stomach cancer, though Sten Forshufvud and other scientists have since conjectured that he was poisoned with arsenic.

The conflict with the rest of Europe led to a period of total war across the continent; his campaigns are studied at military academies the world over. While considered a tyrant by his opponents, he is also remembered for the establishment of the Napoleonic code, which laid the administrative and judicial foundations for much of Western Europe.