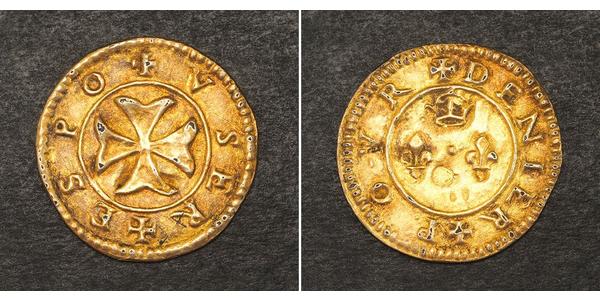 Vermeil is an alternative for the usual term silver-gilt. It is a French word which came into use in the English language, mostly in America, in the 19th century, and is rare in British English.

The "treizain de mariage" or "denier epouser" was a tradition during a marriage in France since the 14th century. It consisted of 13 silver treizain coins (later gilt tournois coins and after 1650 gilt tokens called "denier eopouser" = "coin for marriage" as the one we have here).  The number   thirteen represented Jesus and the twelve apostles, and the act of   giving them symbolised a compensation to the bride´s parents for the dowry.  Twelve of the coins (and later  tokens) were presented to the parents of the bride and one was given to the priest. We have here one of the earliest token types, made of silver and with thick gold plating (called "vermeil", a term used for thick plating in France). Later pieces were made of copper or silver only.

Only 1$ shipping on each addittonal item purchased!