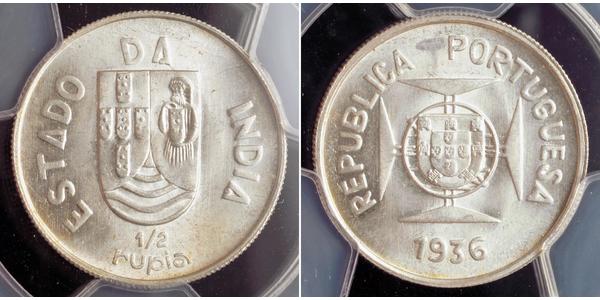 Portuguese India was the aggregate of Portugal's colonial holdings in India. The government started in 1505, six years after the discovery of a sea route to India by Vasco da Gama, with the nomination of the first Viceroy Francisco de Almeida, then settled at Kochi. Until 1752, the "State of India" included all Portuguese possessions in the Indian Ocean, from southern Africa to Southeast Asia, governed by either a Viceroy or a Governor from headquarters established in Goa since 1510. In 1752 Mozambique got its own government and in 1844 the Portuguese Government of India stopped administering the territory of Macau, Solor and Timor, being then confined to Malabar. At the time of British India's independence in 1947, Portuguese India included a number of enclaves on India's western coast, including Goa proper, as well as the coastal enclaves of Daman (Port: Damão) and Diu, and the enclaves of Dadra and Nagar Haveli, which lie inland from Daman. The territories of Portuguese India were sometimes referred to collectively as Goa. Portugal lost the last two enclaves in 1954, and finally the remaining three in December 1961, when they were occupied by India (although Portugal only recognized the annexation in 1975, after the Carnation Revolution and the fall of the Estado Novo regime).

The First Portuguese Republic (Portuguese: Primeira República) spans a complex 16 year period in the history of Portugal, between the end of the period of constitutional monarchy marked by the 5 October 1910 revolution and the 28 May coup d'état of 1926. The last movement instituted a military dictatorship known as Ditadura Nacional (national dictatorship) that would be followed by the corporatist Estado Novo (new state) regime of António de Oliveira Salazar.