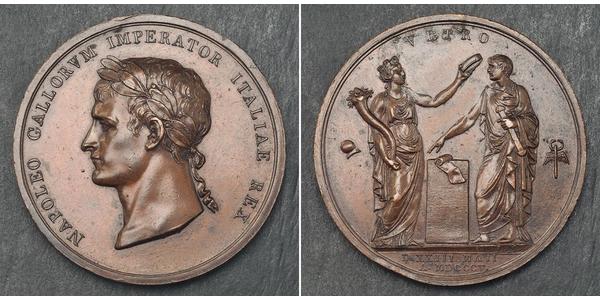 Obverse: Laureate head of Napoleon Bonaparte, as Emperor of France and King of Italy, left. Legend: NAPOLEO GALLORVM IMPERATOR ITALIAE REX Reverse: Italy pose the iron crown on the head of Napoleon dressed as a Roman senator. Napoleon extends his right hand over an altar on which is located the Constitution, behind Italy a Corinthian helmet, a winged caduceus behind Napoleon. Legend: VLTRO Exergue:  D XXIII MAII / A MDCCCV.

The Kingdom of Italy was an artificial entity established by Napoleon as a buffer state against Austria. It consisted of Lombardy, Venetia, Modena, and Ancona of the Papal States. The actual ruler was Eugene de Beauharnais, stepson of Napoleon and viceroy of the kingdom.