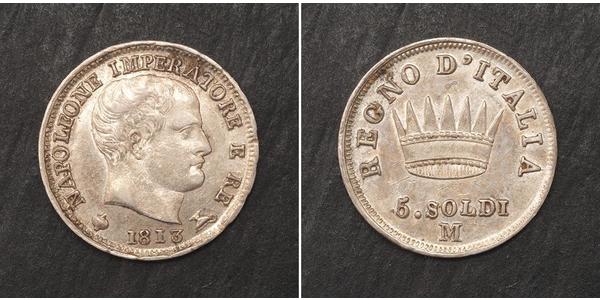 Reverse: Crown of the Kingdom of Italy, surrounded by legend. Value and mint mark below. Legend: REGON D´ITALIA / 5. SOLDI / M

The kingdom of Italy was an artificial entity   established by Napoleon as a buffer state against Austria. It consisted   of Lombardy, Venetia, Modena, and Ancona of the Papal States. The actual   ruler was Eugene de Beauharnais, stepson of Napoleon and viceroy of the   kingdom.

Napoleon Bonaparte (15 August 1769 – 5 May 1821) was a French military and political   leader who had a significant impact on the history of Europe. He was a   general during the French Revolution, the ruler of France as First Consul of the French Republic and Emperor of the First French Empire.

Born in Corsica and trained as an artillery officer   in mainland France, he rose to prominence during the French Revolution   and led successful campaigns against the First and Second Coalitions   arrayed against France. In 1799, Napoleon staged a coup d'état and installed himself as First Consul; five years later he crowned   himself Emperor of the French. In the first decade of the nineteenth   century, he turned the armies of France against every major European   power and dominated continental Europe through a series of military   victories - epitomised in battles such as Austerlitz and Friedland. He   maintained France's sphere of influence by the formation of extensive   alliances and the appointment of friends and family members to rule   other European countries as French client states.

The French invasion of Russia in 1812 marked a turning point in Napoleon's fortunes. His Grande Armée was wrecked in the campaign and never fully recovered. In 1813, the   Sixth Coalition defeated his forces at Leipzig, invaded France and   exiled him to the island of Elba. Less than a year later, he returned   and was finally defeated at the Battle of Waterloo in June 1815.   Napoleon spent the last six years of his life under British supervision   on the island of Saint Helena, where he died in 1821. The autopsy   concluded he died of stomach cancer though Sten Forshufvud and other   scientists in the 1960s conjectured that he had been poisoned with   arsenic.

Napoleon developed few military innovations, drew his   tactics from different sources and scored major victories with a   modernised French army. His campaigns are studied at military academies   the world over and he is widely regarded as one of history's greatest   commanders. While considered a tyrant by his opponents, he is remembered   for the establishment of the Napoleonic code, which laid the   administrative foundations for much of Western Europe.