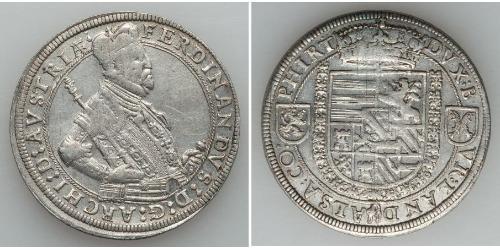 1595, Archduke Ferdinand II. Silver Thaler Coin. Ensisheim (Alsace,France) mint! Denomination: Thaler Mint Period: 1593-1595 State: Holy Roman Empire Mint Place: Ensisheim (Alsace, France). Reference: Davenport 8092, Voglhuber 84 (var. 7), Klemesch 168, KM-. R! Weight: 28.44gm Diameter: 41mm Material: Silver Obverse: Crowned and armored bust of Archduke Ferdinand II right, holding sword and scepter. Comment: The engraver seems to have forgotten to punch the letter “R” into AVSTRIAE, which resulted in a mis-spelling of ther ruler´s ducal nationality! Legend: x FERDINANDVS x D x G x ARCHID x AVSTIAE (insteead of AVSTRIAE!) x Reverse: Crowned Arms (spanish castles and lions, bohemian lion, stripes of burgundy) surrounded by collar of the Golden Fleece, which hangs below and splits legend. Small shields at sides ( double fish and lion) splitting legends. Legend: DVX . BV (shield with two fishes) RG : LAN – ALSA COM (shield w. lion) PHIRT For your consideration a rare silver thaler, struck at teh Ensisheim mint of teh Alsace province, which is today incorporated in France! Ensisheim is a town in Alsace, France. On November 7, 1492, a 250 pound meteorite fell there, and since then it has attracted many meteorite enthusiasts. The Germanic origins of the village’s name reflects the area’s history. Authenticty unconditionally guaranteed. In the Holy Roman Empire, the Thaler was used as the standard against which the various states' currencies could be valued. Ferdinand II, Archduke of Further Austria (Linz, June 14, 1529 – January 24, 1595) was ruler of Further Austria including Tirol. Archduke Ferdinand of Austria was the second son of Ferdinand I, Holy Roman Emperor and Anna of Bohemia and Hungary. He was a younger brother of Emperor Maximilian II. At the behest of his father, he was put into charge of the administration of Bohemia in 1547. Also, he led the campaign against the Turks in Hungary in 1556. In 1557, he was secretly married to Philippine Welser, daughter of a patrician from Augsburg, with whom he had several children. The marriage was only permitted by Emperor Ferdinand I in 1559 under the condition of secrecy. The children were to receive the name “of Austria” but would only be entitled to inherit if the House of Habsburg would become totally extinct in the male line (morganatic marriage). The sons born of this marriage received the title Margrave of Burgau, an old Habsburg possession in Further Austria. The younger of the sons, who survived his father, later received princely rank, becoming Fürst zu Burgau. After his father’s death in 1564, Ferdinand received the rulership over Tyrol and other Further Austrian possessions under his father’s will. However, he remained as governor of Bohemia in Prague until 1567 following the wishes of his brother Maximilian II. In his own lands, Ferdinand made sure that the Catholic counterreformation would prevail. Since he was an avid collector of art, the collection of the famous Castle Ambras was started in his time. He had begun to work on it even during his time in Bohemia and subsequently moved it to Tyrol. In particular, the gallery of portraits and the collection of armor were highly expensive, which is why the archduke had incurred a high level of debt. Today, those collections are in the Kunsthistorisches Museum in Vienna. After the death of Philippine in 1580, he married Anne Catherine, a daughter of William I, Duke of Mantua, in 1582. Archduke Ferdinand died on January 24, 1595. Since his sons from the first marriage were not entitled to the inheritance, and the second produced only surviving daughters, Tirol was reunified with the other Habsburg lines. His daughter from the Mantuan marriage became the Empress Anna, consort of Emperor Mathias, who received his Further Austrian inheritance. 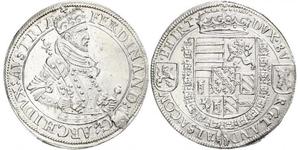 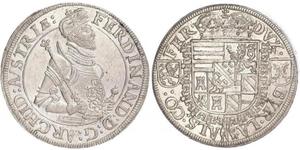 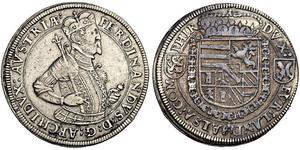 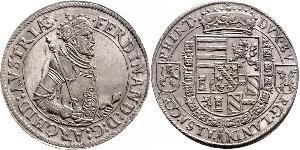 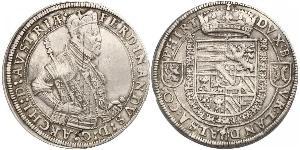 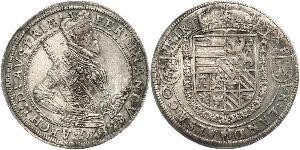 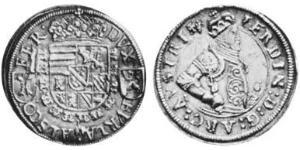 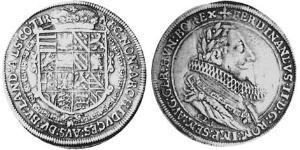