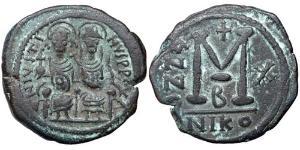 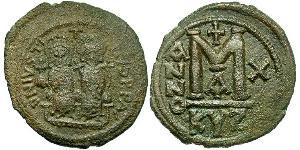 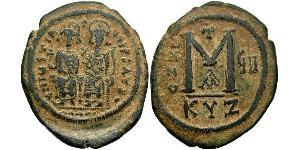 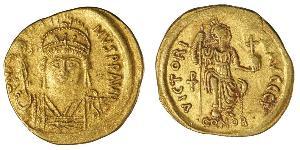 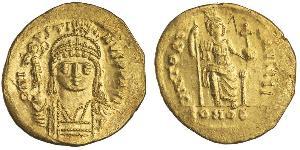 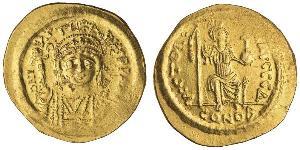 Justin II (520-578)from the WikipediaRead original article
From Wikipedia, the free encyclopedia
Jump to: navigation, search

Justin II (Latin: Flavius Iustinus Iunior Augustus;[1] Ancient Greek: Φλάβιος Ἰουστίνος ὁ νεώτερος; c. 520 – 5 October 578) was Byzantine Emperor from 565 to 574. He was the husband of Sophia, nephew of Justinian I and the Empress Theodora, and was therefore a member of the Justinian Dynasty. His reign is marked by war with Persia and the loss of the greater part of Italy. He presented the Cross of Justin II to Saint Peter's, Rome.

He was a son of Vigilantia and Dulcidio (or Dulcissimus), respectively the sister and brother-in-law of Justinian. His siblings included Marcellus and Praejecta.

Justinian I died on the night of 14 to 15 November 565. Callinicus, the praepositus sacri cubiculi, seems to have been the only witness to his dying moments, and later claimed that Justinian had designated "Justin, Vigilantia's son" as his heir in a deathbed decision. The clarification was needed because there was another nephew and candidate for the throne, Justin, son of Germanus. Modern historians suspect Callinicus may have fabricated the last words of Justinian to secure the succession for his political ally.[2] As Robert Browning (a modern historian, not the poet) observed: "Did Justinian really bring himself in the end to make a choice, or did Callinicus make it for him? Only Callinicus knew."[3]

In any case, Callinicus started alerting those most interested in the succession, originally various members of the Byzantine Senate. Then they jointly informed Justin and Vigilantia, offering the throne. Justin accepted after the traditional token show of reluctance, and with his wife Sophia, he was escorted to the Great Palace of Constantinople. The Excubitors blocked the palace entrances during the night, and early in the morning, John Scholasticus, Patriarch of Constantinople, crowned the new Augustus. Only then was the death of Justinian and the succession of Justin publicly announced in the Hippodrome of Constantinople.[4]

Both the Patriarch and Tiberius, commander of the Excubitors, had been recently appointed, with Justin having played a part in their respective appointments, in his role as Justinian's curopalates. Their willingness to elevate their patron and ally to the throne was hardly surprising.[4]

In the first few days of his reign Justin paid his uncle's debts, administered justice in person, and proclaimed universal religious toleration. Contrary to his uncle, Justin relied completely on the support of the aristocratic party.

Proud of character, and faced with an empty treasury, he discontinued Justinian's practice of buying off potential enemies. Immediately after his accession, Justin halted the payment of subsidies to the Avars, ending a truce that had existed since 558. After the Avars and the neighbouring tribe of the Lombards had combined to destroy the Gepids, from whom Justin had obtained the Danube fortress of Sirmium, Avar pressure caused the Lombards to migrate West, and in 568 they invaded Italy under their king Alboin. They quickly overran the Po valley, and within a few years they had made themselves masters of nearly the entire country. The Avars themselves crossed the Danube in 573 or 574, when the Empire's attention was distracted by troubles on the Persian frontier. They were only placated by the payment of a subsidy of 60,000 silver pieces by Justin's successor Tiberius.[5]

The North and East frontiers were the main focus of Justin's attention. In 572 his refusal to pay tribute to the Persians in combination with overtures to the Turks led to a war with the Sassanid Empire. After two disastrous campaigns, in which the Persians overran Syria and captured the strategically important fortress of Dara, Justin reportedly lost his mind.[citation needed]

The historian Previte-Orton describes Justin as "a rigid man, dazzled by his predecessor's glories, to whom fell the task of guiding an exhausted, ill-defended Empire through a crisis of the first magnitude and a new movement of peoples". Previte-Orton continues,

In foreign affairs he took the attitude of the invincible, unbending Roman, and in the disasters which his lack of realism occasioned, his reason ultimately gave way. It was foreign powers which he underrated and hoped to bluff by a lofty inflexibility, for he was well aware of the desperate state of the finances and the army and of the need to reconcile the Monophysites."[6]

The temporary fits of insanity into which Justin fell warned him to name a colleague. Passing over his own relatives, he raised, on the advice of Sophia, the general Tiberius to be Caesar in December 574, adopting him as his son,[7] and withdrew into retirement. In 574, Sophia paid 45,000 solidi to Chosroes in return for a year's truce.[5]

According to John of Ephesus, as Justin II slipped into the unbridled madness of his final days he was pulled through the palace on a wheeled throne, biting attendants as he passed. He reportedly ordered organ music to be played constantly throughout the palace in an attempt to soothe his frenzied mind, and it was rumoured that his taste for attendants extended as far as "devouring" a number of them during his reign.[8] The tardy knowledge of his own impotence determined him to lay down the weight of the diadem; he showed some symptoms of a discerning and even magnanimous spirit when he addressed his assembly,

You behold the ensigns of supreme power. You are about to receive them, not from my hand, but from the hand of God. Honor them, and from them you will derive honor. Respect the empress your mother: you are now her son; before, you were her servant. Delight not in blood; abstain from revenge; avoid those actions by which I have incurred the public hatred; and consult the experience, rather than the example, of your predecessor. As a man, I have sinned; as a sinner, even in this life, I have been severely punished: but these servants (and he pointed to his ministers), who have abused my confidence, and inflamed my passions, will appear with me before the tribunal of Christ. I have been dazzled by the splendor of the diadem: be thou wise and modest; remember what you have been, remember what you are. You see around us your slaves, and your children: with the authority, assume the tenderness, of a parent. Love your people like yourself; cultivate the affections, maintain the discipline, of the army; protect the fortunes of the rich, relieve the necessities of the poor.

In silence and in tears, the assembly applauded the counsels, and sympathized with the repentance of their prince. Tiberius received the diadem on his knees; and Justin, who in his abdication appeared most worthy to reign, addressed the new monarch in the following words: "If you consent, I live; if you command, I die: may the God of heaven and earth infuse into your heart whatever I have neglected or forgotten." The four last years of the emperor Justin were passed in tranquil obscurity: his conscience was no longer tormented by the remembrance of those duties which he was incapable of discharging; and his choice was justified by the filial reverence and gratitude of Tiberius.[9]

Sophia and Tiberius ruled together as joint regents for four years, while Justin sank into growing insanity. When Justin died in 578, Tiberius succeeded him as Tiberius II Constantine.