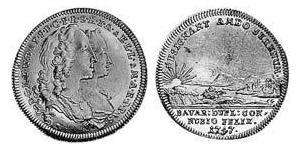 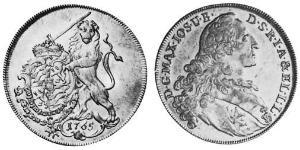 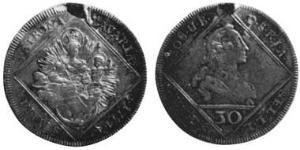 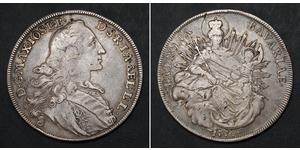 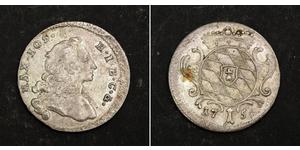 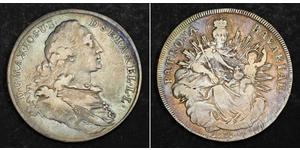 Maximilian III Joseph, Elector of Bavaria (1727 – 1777)from the WikipediaRead original article
From Wikipedia, the free encyclopedia
Jump to: navigation, search

Upon his father's death in January 1745, he inherited a country in the process of being invaded by Austrian armies (see War of the Austrian Succession). The 18-year-old Maximilian Joseph wavered between the Peace-party, led by his mother Maria Amalia of Austria and Army Commander Friedrich Heinrich von Seckendorff and the War-party, led by Foreign Minister General Ignaz Count of Törring and the French envoy Chavigny. After the decisive defeat in the Battle of Pfaffenhofen on 15 April Maximilian Joseph quickly abandoned his father's imperial pretenses and made peace with Maria Theresa in the Treaty of Füssen, in which he agreed to support her husband, Grand Duke Francis Stephen of Tuscany, in the upcoming imperial election. During the Seven Years' War Bavarian forces then fought on Habsburg's side. Maximilian Joseph's sister Maria Josepha of Bavaria was married in 1765 with Maria Theresa's son Emperor Joseph II. But a long-term weakening of Prussia was not in the Bavarian interest, as this country offered the only counterweight to the Habsburg monarchy. Maximilian Joseph tried, as far as possible, to keep Bavaria out of the wars. Apart from the district troops, he presented only a small force of 4000 men. The Elector took his auxiliary troops already back in 1758/1759. Together with the Wittelsbach Elector Charles Theodore of the Palatinate he enforced the neutrality of the empire during the conflict.

Maximilian Joseph was a progressive and enlightened ruler who did much to improve the development of his country. The elector encouraged agriculture, industries and the exploitation of the mineral wealth of the country and abolished the Jesuit censorship of the press. In 1747 the porcelain factory at Nymphenburg was established, while the Codex Maximilianeus bavaricus civilis was written in 1756. Munich's first academic institution, the Bavarian Academy of Sciences, was founded in 1759 by Maximilian III. During the severe famine in 1770 Maximilian sold crown jewels to pay corn shipments. In this year he also issued his edict against the extravagant pomposity of the Church which contributed to the end of the era of Bavarian rococo. He also forbade the Oberammergau Passion Play. In 1771 the elector regulated the general school attendance.

In December of 1777 Maximilian Joseph rode in his carriage through Munich; on the ride, as he passed one of the tower clocks, the mechanism broke, and the clock struck 77 times. Commenting to the passengers, Max Joseph decided this was an omen, and that his years had run out. Within days, he was stricken with a strange disease. None of his 15 doctors could diagnose it, but by Christmas, it had become clear that it was a particularly virulent strain of small pox, called by contemporaries, purple small pox.[1]

By the last day of the month he was dead without leaving an heir. Maximilian III Joseph is buried in the crypt of the Theatinerkirche in Munich.

As the last of the junior branch of the Wittelsbach dynasty which derived from Louis IV, Holy Roman Emperor and had ruled Bavaria since early 14th century, Maximilian's death led to a succession dispute and the brief War of the Bavarian Succession. He was succeeded by his distant cousin, the Elector Palatine Charles Theodore from the senior branch of the dynasty. Maximilian's widow Maria Anna Sophia of Saxony and his sister Duchess Maria Antonia of Bavaria as well as Maria Anna of Palatinate-Sulzbach, the widow of the former Bavarian crown prince Duke Clement Francis of Bavaria negotiated with Prussia to secure Bavaria's independence from Austria, which had invaded portions of the duchy immediately after the Elector's death.[2]

Arms of the Bavarian electorate 1753

Conventionsthaler with the portrait of Maximilian III. Joseph

Maximilian III Joseph ordered in 1751 François de Cuvilliés to construct the splendid rococo Cuvilliés Theatre and in 1755 the Stone Hall of Nymphenburg Palace. He also ordered to decorate some rooms of the New Schleissheim Palace in rococo style.

Wolfgang Amadeus Mozart was received by Maximilian III Joseph, who was like his sister Maria Antonia Walpurgis of Bavaria skilled in music and composed, but due to a need for strict frugality no post could be offered. In 1775 La finta giardiniera, an Italian opera by Wolfgang Amadeus Mozart, received its first performance at the Salvatortheater in Munich.