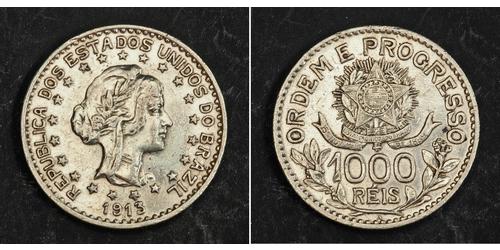 Obverse: Female wreathed and capped bust (Lady Liberty or the personification of the Republic) right. Circle of stars around, date (1913) below. Legend: REPUBLICA DOS ESTADOS UNIDOS DO BRAZIL 1913

Reverse: Arms of the Republic of Brazil above value (1000 REIS) within wreath. Mint initial (A for Berlin) below. Legend: ORDEM E PROGRESSO 1000 REIS